In which Amy McDaniel and I visit Panama for a week.

Takeaway: For a country the size of South Carolina, Panama has a huge variety of place. Panama City is urban, towering, vibrant with history and culture. Just outside the city, the canal is popping with wildlife (and canal). The San Blas Islands, on the Caribbean side, are postcard paradises, and El Vallé de Anton is a verdant volcano.

We went because of frogs. Kind of. A month ago I sat down to read The Sixth Extinction, by Elizabeth Kolbert, which begins with a look at the golden frogs going extinct in El Vallé de Anton. Unrelatedly, Amy said something about taking a trip. I said, “Let’s go see these frogs.”

And Amy’s dad served in Panama when he was in the Army, so she’d always wanted to go. She started putting together an itinerary.

We arrived at 2am on Thursday, the one before this last one. We spent two very long and antsy hours going through customs.

We met our ride from the hotel and he drove us through the darkness, winding finally through the empty and ancient-seeming streets of Casco Viejo, where he dropped us off at just after 4am. We noted it was a beautiful place and fell asleep.

Note: you can click these images and scroll through larger versions, for an abbreviated story of our trip.

We had a late breakfast at Caffe Italia: sandwiches and I had a perfect cappuccino. My high school Spanish wasn’t coming back to me because even though I studied it for four years, I never got it the first time around. We went to one of the very few (perhaps two) bookstores in Panama City and bought a English/Spanish dictionary, which we carried with us and sort of reverentially called “The Book.”

We went to the fish market (Pescado Mercado; I got that) and nibbled on some ceviches. Then we got in a cab to visit the Miraflores Locks, one (out of two) of sets of locks on the Pacific side of the canal. Our cab driver decided to take us around the museum himself.

It was fascinating stuff. In a nutshell: France tried to build the canal a few years before the US, but they were stymied by yellow fever and a river that passes through the middle of the country. Their plan was to excavate the land, bringing it down to sea level, so the oceans would meet. But the river kept flooding the areas where they’d dig. The US’s solution, a decade later, was to dam the river and flood the area, then bring the ocean to that elevation, so to speak, using a system of locks.

Unfortunately, we went to Miraflores in the early afternoon, and they only send commercial boats through in the morning and the night, so we didn’t see any big ships go through. Luckily, though, we did get to see some small, pleasure boats go through. It takes about ten minutes to fill up one of the sections with tons and tons of water. Then they open the huge doors and the boats pass into the next, higher section.

Here’s a video Amy took of one of the exhibits at the museum. It shows a time lapse of what it looks like for a boat to enter the canal. Not pictured is how the floor moves, heightening the sense of reality.

After spending a couple days in Panama City, including the chance to relish an amazing tasting menu at Manolo Caracol, we woke up early on Saturday—5am—to be picked up for our trip to the San Blas islands. Unfortunately, the driver misread our pickup location, and we nearly missed the trip. After a hectic hour and much help from a wonderful English-speaking hotel clerk, we worked it out with a cabdriver to take us to meet the caravan, already on its way.

It was a harrowing 3 hour drive across the mountains. The roads were steep, windy, and often half-formed. About halfway into the trip we entered the sovereign territory of the Kuna Indians, called Guna Yala. They won their independence from Panama in 1925. They control the San Blas islands.

They were friendly, and they took us in their boats on a tour around the 365 islands that make up Guna Yala (the official name of their territory).
We went past their “Community” islands. Our guide, or host, or first mate I guess, named Kevin Costner, spoke a little English—unlike most of the other Kuna people. He told us the Community has everything: schools, library, wi-fi. You can see Kevin at the end of this video, as we pull onto an island for gas.

Germain, our driver, liked to go really fast, especially over waves. We caught some major air. We pulled up to an island at random and hung out for a few hours.

We had lunch there and swam. Kevin and his friends taught me some Spanish and I taught them some English. And, because we didn’t know how long we’d be there, we didn’t put sunscreen on. We got fiercely burned in the equatorial sun!
And we didn’t know we were getting sunburnt so badly; it was cloudy and we were in the shade. But after hanging out on this island for a while, we were taken to the island where we’d spend the night in a cabin.
That’s when Amy pointed out how red we were. We didn’t get a lot of sleep that night.
On the island, they’d blow a conch when it was time for dinner (lobster) or breakfast (huevos) or lunch (some very big fish). There wasn’t much to do but swim and read. We played a puzzle game. Then we got picked up by a boat, for our return trip.

On the way back, we stopped at the Community.

There was a Texan on the island, a guy on a humanitarian mission there “to help them out,” and he very kindly escorted us around the island and told us about the Kuna people.

(listen to the Sugar song)

We were shuttled back to Panama City where we stayed the night in a hotel. It was good to have modern comforts, as our sunburns were still killing us. We were careful, though, not to get sucked into luxury—perhaps a real problem in Panama, as exemplified by this example from The Book, our dictionary:

We spent just over 12 hours in the hotel, didn’t even get to swim in the infinity pool, before we were off to Gamboa, where we’d tour the canal, see the wildlife, and spend the night on a houseboat.

Our guide this time was named Juan, and he was friendly and engaging and informative. He told everyone a lot more info about the canal, and kept an eye out for interesting birds, monkeys, and crocodiles. He’d be talking about how one of the ships was excavating for the canal expansion, when he’d pause and say “Oh look over there, a flycatcher.”

It was a highlight of the trip, to be so close to container ships as they moved through the canal. They pay around $400,000 for the passage (as opposed to $4M to go around the whole continent), and it takes 8-10 hours (as opposed to 2-3 weeks).

All boats on the canal require Panamanian pilots as they pass through.
You can hear Juan on this video as he explains that tugboats cost from seven to ten million dollars.

We saw a crocodile on the way, not pictured. Pictured? Many monkeys. I think these ones are called Whitefaced monkeys.

We arrived at the house boat on Lake Gatun, the manmade lake that provides water for the locks. We ate lunch there, then went on a kayak trip to a waterfall. There were about a dozen of us. We swam around a bit and then everyone took off except for Amy, me and Juan.

A few other employees stayed, too. Luis took us fishing.

And it was amazingly restful to just sit with Juan for a while, hear more stories about the canal and his life, such as his ability to do things fast. Like if it took 3 hours to drive somewhere, Juan did it in 30 minutes, just once. Or say a hike usually took six hours? He did it in 30 minutes but nearly broke his leg. Juan is a good guy.
We had breakfast with Juan the next day, and we headed back to the boat launch. Juan took our picture on the canal.

At the boat launch we met up with Maria Rojas, who would drive us to El Vallé de Anton. This was another 3ish hour drive through winding mountain roads. The first thing we passed, though, was over this bridge (which you can see in Amy’s canal video, from back at the museum), which shows the work they’re doing on the new canal:

When we arrived in El Vallé we checked into our hotel, which had a restaurant called O’Pedro’s. We had lunch there, and realized it was St. Patrick’s Day. What luck! Then we went horseback riding.

El Vallé is a town of 6,000 people, situated completely inside of an active volcano, but it’s also a pleasant (or fresh, as the Panamanians call it) 70 degrees there all the time. It is ringed by mountains, so even with a panoramic camera you can’t capture the real majesty of the place.

Then we went to the zoo, which really seemed like it could have been someone’s backyard. Chickens were wandering amok. There was a cage for iguanas, and then there were a bunch of iguanas wandering around free. There were hundreds of plants sitting in 5 gallon paint buckets, some which seemed like they needed to be repotted. At one point while trying to find the frogs, we actually thought we were trespassing on private property, because we walked past someone’s house. The cages were rudimentary. Here’s the zookeeper’s shed:

But it was the greatest zoo I’ve ever been to. Everything was so unmediated. I don’t know if the animals seemed worse off than they do in our national zoo. Well, this Tayra did. I’d never heard of a Tayra before, and was completely in awe of this guy. The way he moves around his cage seems like a level in Monument Valley.

I took a ton of pictures at the zoo, which you can see at my Google+ page. Here are just a few of the animals we saw:

After the zoo, we ate lunch at a Peruvian place. Here are two things I haven’t written about Panama yet: 1) there were no bugs; 2) the food, unfortunately, was nothing to write home about. But at this Peruvian restaurant we ate some delicious fried rice.

Then we went on a hike to look at the square trees. Apparently this is the only place in the world that they exist.


Back at our hotel, we swam in a hot water swimming pool. Because El Vallé is a volcano there are some hot springs. It was so restful!

That night we had dinner at an Italian restaurant (interesting that our first and last meals were Italian). There were no cabs running at that point, a feature of the town that we didn’t know, so the owner of the restaurant, an Italian expat, shuttled us back to O’Pedro’s. We played pool and waited for Maria Rojas to drive us to Tucuman, the airport, so we could fly home.

One week in Panama.

Goodbye, Panama, and thanks! 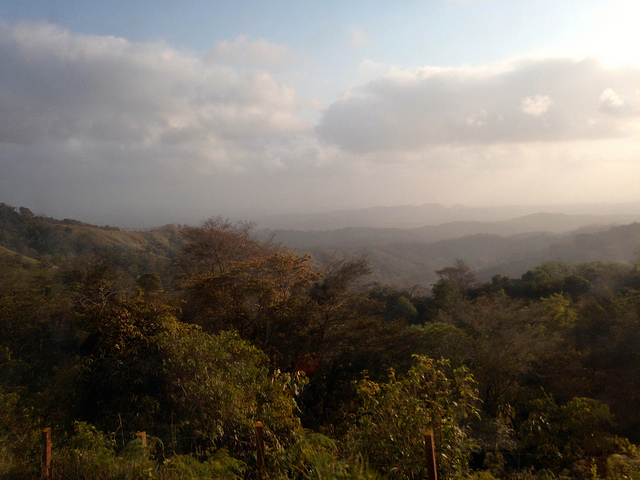